Hyu ndai reveals annoying noise under the hood of car 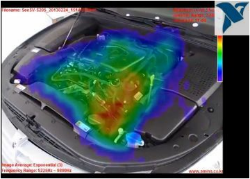 When you rush on a car on the highway, the last thing you want to hear is the engine noise from under the hood. These noises, including hum, whistle and bounce (Buzzes, Squeaks, and Rattles or BSRs) make the driver irritable. Before the new car gets on the road, car manufacturers conduct thorough testing to remove annoying BSRs of noise. However, sometimes it's pretty hard to tell where the noise comes from. Given the severity of the problem, Hyundai has developed a portable system that uses the acoustic diagram to identify and display the sources of real-time noise in a convenient way.

Acoustic diagram includes a scheme for constructing a source of noise and uses an acoustic array. The system localizes noise sources using the time delay, which occurs when sound passes through an array of microphones, like an acoustic camera. (the acoustic chamber transforms sound into color, approximately as thermal we can visualize the temperature distribution). Converters convert the signal from the microphone array to the noise distribution profile. And in the end we see the noise distribution map on the surface of the engine.

Follow the system we have developed on the basis of LabVIEW FPGA Module, where a resource-intensive algorithm for processing audio streams was implemented on NI Single-Board RIO. This solved the problem of system size, cost, and portability. This solution also made it possible to realize signal matching, filtering and building a sound distribution diagram in a single FPGA chip.FPGA

Hyundai installed all the sensors in the main unit with integrated cables, which reduced the size by 60% and reduced the weight of the system by 70% compared to the first version. As a result, the system weighs less than 5 pounds (2,27 kg) and is used to test Hyundai cars, in particular, expensive models such as the Hyundai Genesis.