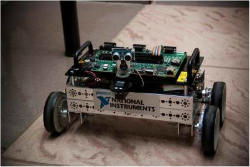 8 and 9 December 2011 was held at the congress center of the Moscow Technical University of Communications and Informatics held the X International Scientific and Practical Conference "Engineering, scientific and educational applications based on the technology of aNative Instruments - 2011". The conference brings together business leaders, engineers, professors, researchers and students from all over Russia, the CIS countries and the Baltic states. The conference was organized by the branch of the corporation National Instruments in Russia, the CIS and the Baltic States and the Peoples' Friendship University of Russia.

The conference presented works on the application of innovative technologies of National Instruments in solving industrial, educational and scientific problems, and also considered the advantages of using modern equipment and software of National Instruments. The conference included a number of events, ranging from plenary sessions, technical presentations, sectional presentations, master classes, discussions with experts, ending with an exhibition and awarding the authors of reports that deserve special attention.

The Stavropol delegation presented several reports to the attention of others and eventually won the nomination “For the best exhibition work” for the Stand for testing on the basis of NI PXI and TestStand.